On April 5 and 7, 2022, the Plenary of the National Supreme Court of Justice  (SCJN) discussed the draft resolution for the unconstitutionality action 64/2021 filed by some Senators of the Congress of the Union against certain articles of the Decree of March 2021, by means of which several provisions of the Electricity Industry Law (LIE) were amended and added.

The SCJN discussed whether or not each of the proposed reforms to the provisions of the LIE would be rendered ineffective in a general manner for being unconstitutional.

A super-majority of at least 8 votes (out of 11 justices) was required to declare the general invalidity of each reformed provision. Although in some cases a simple majority of 7 votes was reached against the constitutionality of the amendments, after their discussion in the plenary, none of the amended provisions reached such super-majority vote..

As a result of the foregoing, the Unconstitutionality Action 64/2021 was dismissed for not reaching the qualified majority to declare the invalidity with general effects of the amendments to the LIE. However, two other constitutional controversies are still pending resolution, mainly in the areas of economic competition and environmental rights.

Thus, the LIE (including its 2021 amendments) will continue to be in force despite the fact that the simple majority of the SCJN has already ruled in favor of the unconstitutionality of certain articles. The fundamental purpose of such reforms is to strengthen advantage in the power generation of electricity to the state-owned companies.

The resolution of the SCJN allows for the injunctions filed by private generators that were provisionally suspended at the time to continue their course and for the constitutionality or unconstitutionality of the application of the reformed provisions of the LIE to be resolved on a case-by-case basis.

In this sense, although the votes issued by the Justices of the SCJN do not constitute binding precedents, they may serve as a basis for the arguments presented in the substantiation of such appeals.

Below, we show schematically the provisions of the LIE that the simple majority of the SCJN considered unconstitutional (and notwithstanding will be in force and effect because no super-majority was reached), and those that are deemed as valid: 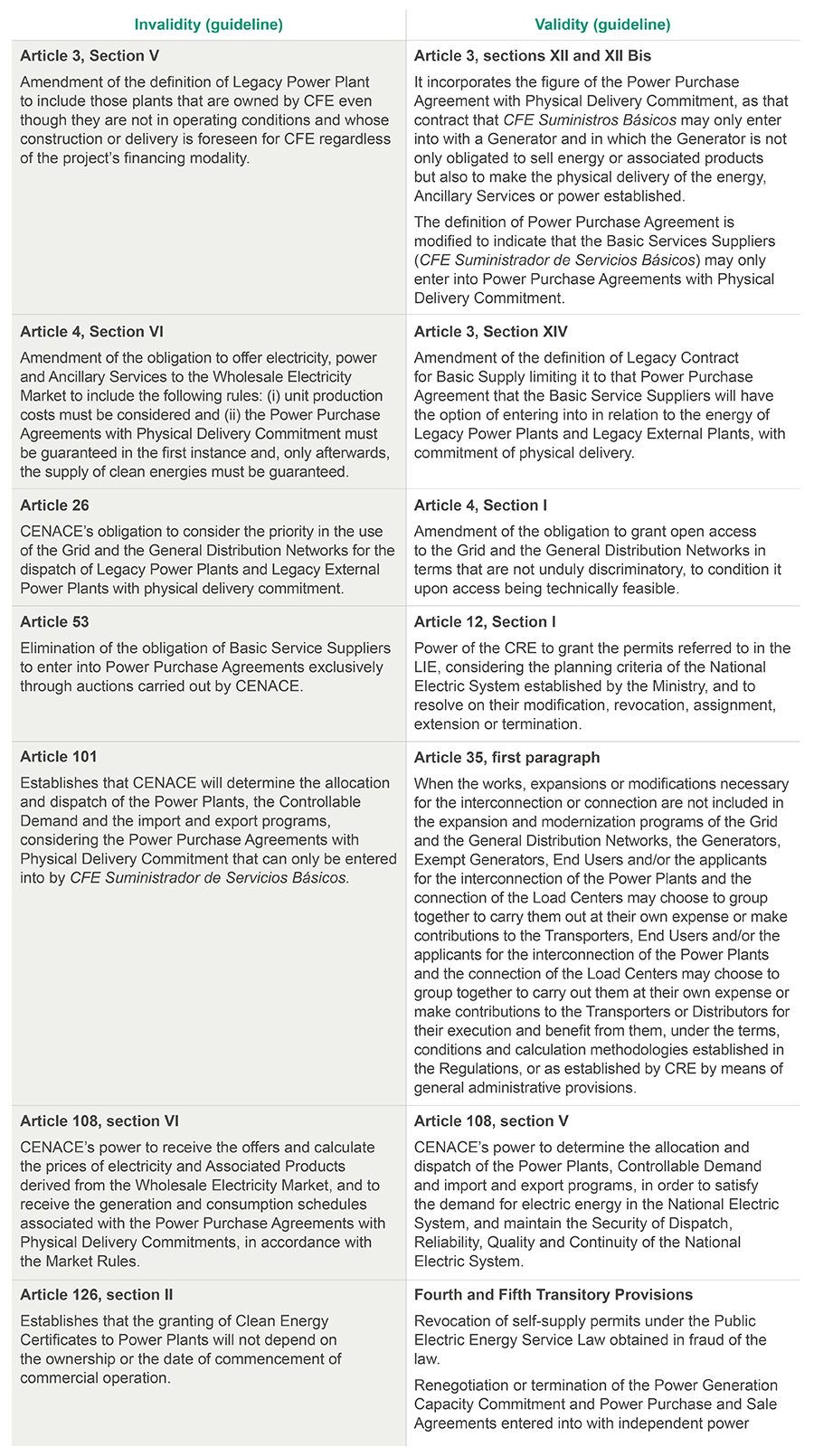 Where are we going?

This resolution may trigger the following legal actions:

On the other hand, during the next few days the Mexican Congress will discuss and vote on the constitutional reform initiative proposed by the President of Mexico that would limit private participation in this sector and substantially change the market rules.

In light of the situation, investment arbitration based on multilateral or bilateral investment treaties may be seen as an option for the protection of foreign investors that may be harmed as a result of the above.