The new Audiovisual Media Law has come into force today and it is packed full of important new features for influencers and streamers.

If the title of the article has already bored you and you are thinking of dismissing us with an “OK boomer”, think again! Before you get back to your channel hang on, this may interest you.

You have all been asking us: Can streamers with their own channels be considered a “an audiovisual media service provider”?

The question is not new. Back in 2015, the Court of Justice of the European Union (CJEU) had already concluded (here) that short videos can be considered “programs” for the purposes of the Media Services Directive (2010) (here). One of the distinctive features of audiovisual media service providers is that they offer those programs.

Based on the above, the ERGA (European Regulators Group for Audiovisual Media Services) held in 2021 that vloggers could be considered “on-demand audiovisual media services providers”, provided that they met certain requirements (here). In particular, the ERGA based its opinion on the above judgment by the CJEU, and on Recital 3 of the new Audiovisual Media Services Directive (2018) (here).

In the eyes of the ERGA, it is an open definition that includes content creators, influencers, streamers or channels on video sharing platforms (e.g., YouTube, Instagram, TikTok or Twitch).

Is all of this applicable in Spain?

Now it is. Some time ago now, the CNMC took on board ERGA’s recommendations and urged the lawmakers to introduce specific regulations for vloggers in the Audiovisual Media Law (LGCA) and it has come into force today (see their reports here (2020) and here (2021)). The regulations should provide legal certainty both to users that access the content and also to the vloggers themselves, so that they are aware of their rights and obligations.

Following the recommendations of the above bodies, the Lower House of Parliament introduced an amendment in this regard during the processing of the Audiovisual Media Law (article 94). The bill comes into force tomorrow since it has been published in the Official State Gazette (see here).

However, these obligations will not come into force until a regulation is approved specifying the requirements that need to be met to be considered a special interest user (see additional provision nine of the law).

Am I affected if I have a channel on a platform?

What is a “video-sharing platform service”?

In general, any service that (a) provides programs, user-generated videos, or both, to the general public; (b) for which the video-sharing platform provider does not have editorial responsibility - i.e. they are not own productions; (c) in order to inform, entertain or educate; (d) by means of electronic communications networks - i.e. the Internet; and (e) which are organized, for example, by algorithms. The definition covers the most popular platforms and social media.

What is a “user of special interest” in this service? 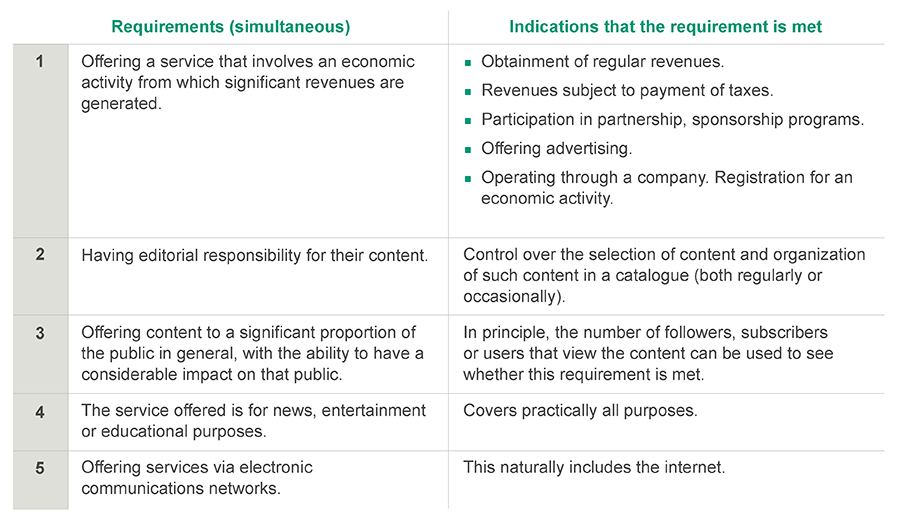 What does “to be established in Spain mean”?

The LGCA lays down several requirements in article 3. As far as we are concerned, basically, a vlogger is understood to be established in Spain if his/her headquarters are in Spain and editorial decisions are taken in Spain.

Even if all the requirements are met, are there any exceptions?

I think it affects me, so what does it actually mean to be a “user of special interest”? 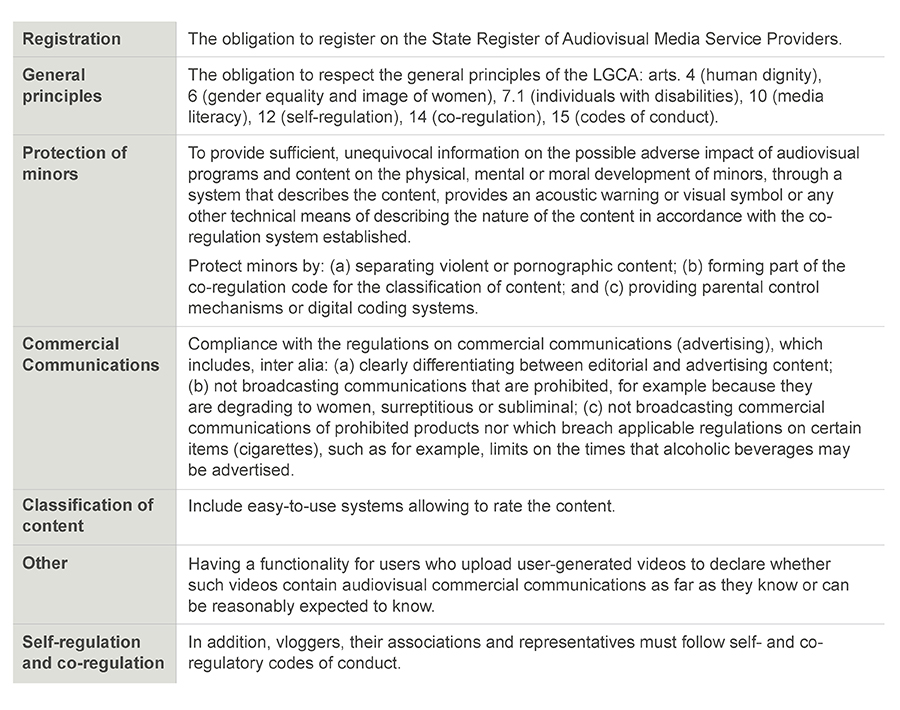 What happens if any of the above obligations are breached?

The breach of the above obligations for a period of one month may be considered a serious or minor breach, depending on the circumstances involved. They are responsible, although the providers on which they broadcast must stop broadcasting as soon as they are asked to do so by the audiovisual authority.

Before the LGCA, did vloggers have any obligations?

The truth is that there were no laws that referred to them expressly. All we had was a self-regulation code (only binding on those who voluntarily signed up for it) applied by Autocontrol (here).

We hope we haven’t bored you too much. It seems that even streamers have come up against the audiovisual law. As the main providers of audiovisual content for a younger audience, it seems reasonable that some of the obligations imposed on other media have been extended to these types of channels. Now you can say: “OK boomer”. You can also take the reform seriously (and call us if you have any doubts).