Decree-Law no. 93/2021, which transformed into national law the EU Directive 2019/1937, was published in the Official Gazette, introducing, among other matters, a set of obligations for companies and public entities regarding the protection of whistleblowers and the creation and implementation of internal channels for reporting of breaches.

Reportable breachses are breaches that are being committed or whose commitment can be reasonably expected, as well as attempts to conceal breaches.

Can be reported any breach that constitutes an act or omission violating European Union law rules, namely in the following matters: 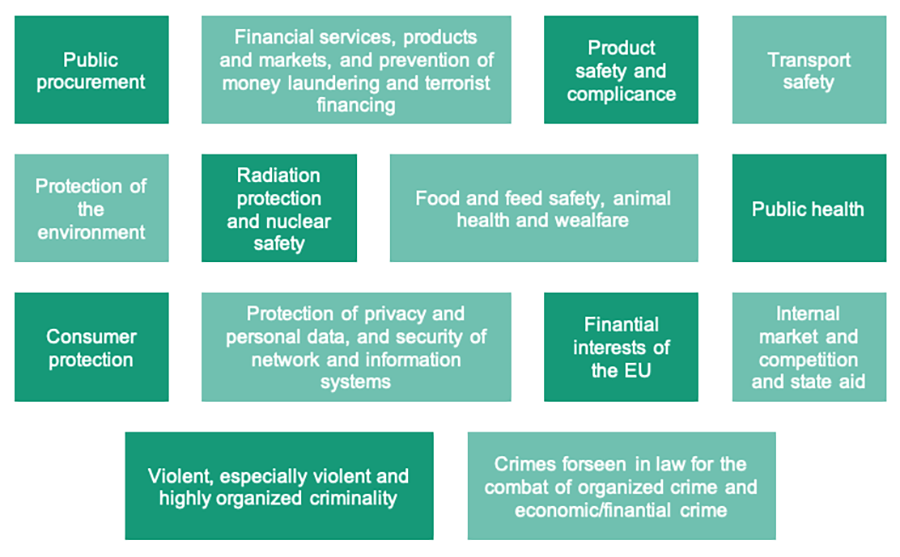 A whistleblower is any person that reports or publicly discloses information on breaches that he came aware due to his professional activity.

It is irrelevant whether the report is based on information obtained on an on-going professional activity or during one that has terminated in the meantime, as well as during the negotiation previous to such professional engagement (namely during the recruitment fase).

Are considered wistleblowers, subject to protection under this regime, the following:

The whistleblower protection regime will also apply to:

3. Criation of the internal reporting channel

Any legal entity may create a reporting channel. However, its creation is mandatory for companies and public legal entities that:

Private entities that employ between 50 and 249 workers may share resources to receive and follow up on reports received.

4. Properties of the internal repporting channel

The obligation of creation and implementation of an internal reporting channel in legal entities has the objective of putting in place a mechanism that enables reporting and safe follow up of reports, in order to ensure:

The internal reporting channels may foresee the submission of reports:

The identity of the wistleblower can only be disclosed:

6. Record and storing of reports

Records of the reports received must be maintained.

Oral reports are recorded, with the whistleblower’s consent, as follows:

The whistleblower has the right to check, rectify and aprove the transcript of the minute by signing it.

The reports must be stored for at least 5 years, or while any administrative or judicial process related to the report, if any of these were initiated in the meantime.

A whistleblower that reports or publicly discloses a breach in good faith and with the serious belief in the truthfulness of the reports is legally protected.

It is legally forbidden to adopt have any retaliatory act against the whistleblower. It is considered a retaliatory act any act or omission, including threats and attempts of acts or omissions, that, directly or indirectly, in a professional context and motivated by the internal or external report or by the public disclosure of the information, unjustly causes or may cause pecuniary or non-pecuniary damages to the whistleblower.

Law assumes the following acts practiced within 2 years after the report or public disclosure as retaliatory acts:

In case of retaliation, the whistleblower has the right to claim for damages.

The breach of the rules set forth in this regime may constitute: