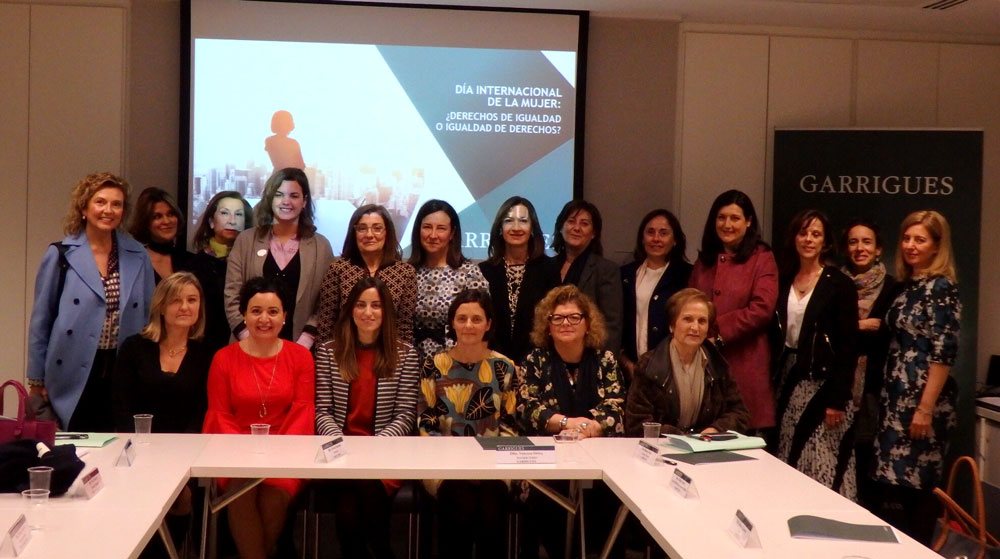 The need to reduce the gender pay gap through regulation and the various work/family-life compatibilization measures which are possible are on the agendas of many Spanish companies. The fact that there exists no specific regulation is driving the development of alternative solutions. This was one of the main points addressed during the round table entitled “The right to equality or equal rights?” which was held today at Garrigues’ offices in Valencia and attended by leading female executives and entrepreneurs from this Community.

Vanessa Orive, a senior associate in Garrigues Employment and labor law department, reminded those participating that in Spain, reference is only made to gender discrimination in the Spanish Constitution (article 14), the Workers’ Statute (article 28) and Organic Law 3/2007. European Directive 2006/54 requires that the absence of both direct and indirect discrimination on the basis of gender, in terms of employment and working conditions - including those relating to dismissal or compensation - be guaranteed, yet it has still to be transposed into Spanish law. Indeed, only 11 EU Member States (Austria, Belgium, Germany, Denmark, France, Finland, Ireland, Italy, Lithuania, Sweden and the United Kingdom) have approved regulations on the transparency of pay data analyzed by gender. María José Calvet, also a senior associate in the same department of Garrigues, brought to the table the pay gap between men and women.

The participants invited by Garrigues had the opportunity to discuss the glass ceiling, the reasons for its existence and how to help break it, as well as the cement ceiling which women have imposed upon themselves.

Sandra Gómez, first deputy mayor of Valencia City Council, stressed that “society continues to be based on the same stereotypes” and that women continue to bear the brunt of family-related burdens: “It is a something ingrained in us from childhood”. She also remarked that “ the gender pay gap is very worrying, but an even greater cause for alarm is the rise in cases of gender-based violence among young people”.

Teresa Puchades, Director at Avanza Urbana, affirmed that in her opinion “the position of women in today’s society is a matter that needs to be addressed in the education system right from the start, and within the family too”. She added that “the cultural change is very profound and it is essential that education in our society be based on gender equality”.

The discussions also focused on compatibilization measures. In the opinion of Emi Boix, executive director at Grupo EMAC, “there is a lot that companies can do to favor the compatibility of work and family life and gender equality, but it will be very difficult to progress unless there is equality within the family itself”. In her view, there is a need for “creativity in the measures adopted”.

In relation to glass walls, another of the factors referred to which prevent women from being promoted to the most senior positions”, Boix remarked that “favoring internal promotion helps to promote equality when, in the formation of candidacies, people decide for themselves whether or not they wish to apply for a position”.

The round table culminated with a Mascletá, a pyrotechnic display put on by María José Lora from the pyrotechnics company Caballer FX Global Foc, which the guests were able to enjoy from the balconies of Garrigues’ Valencia offices.