Sergio is a Partner and co-head of the M&A department at Garrigues in Lima. He focuses his practice on M&A, financing, project finance, and Capital Markets.

Sergio has extensive experience in M&A, as well as in all kinds of financing and structuring financing transactions (including project finance, corporate finance, financing for business acquisitions, etc.).

Prior to joining Garrigues, he was a Partner at Rubio Leguía Normand, as well as having formed part of Simpson Thacher & Bartlett LLP, in New York. He has also worked as deputy director of the Department of Technical Affairs of the Agency for the Promotion of Private Investment of Peru (ProInversión).

His work has been recognized by publications such as Chambers & Partners, Legal 500, Leaders League,Latin Lawyer and IFLR.
Recognitions include:

In the academic field, he has taught Mergers & Acquisitions in several universities and programs.

He is licensed to practice law in Lima, Peru and the State of New York. 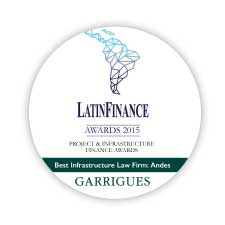