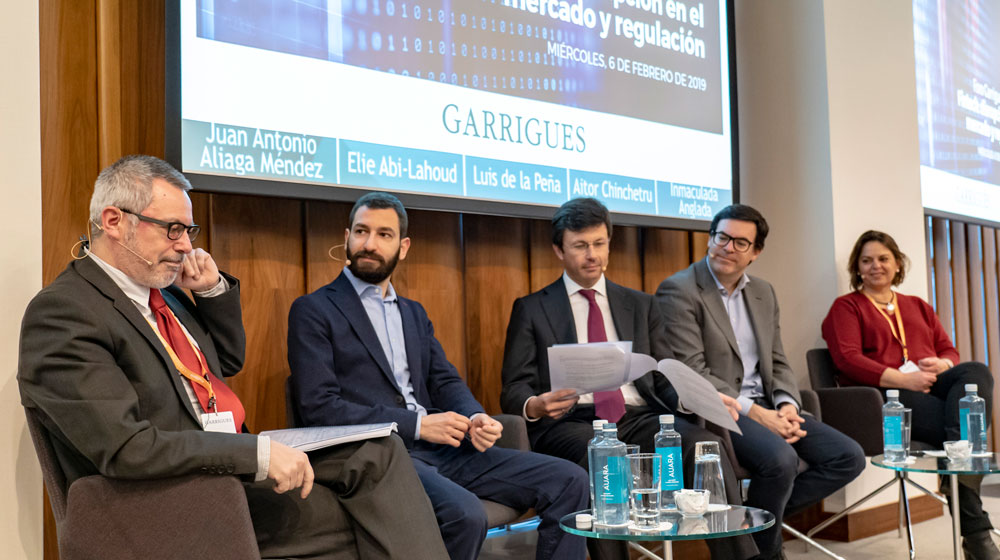 The Garrigues Digital Forum has brought together regulators from Spain, Portugal and Colombia, and representatives from the private sector, to analyze the challenges involved in the regulation of innovative technology-based financial services.

Financial market regulators in today's new digital environment have been put to the test by the emergence of the Fintech phenomenon. The emergence of new players has posed some major legal challenges which regulators now have the task of addressing. The Garrigues Digital Forum has been devoted to this question. In this round table event, various experts in Fintech and operators came together with regulators from Spain, Portugal and Colombia to set out their views on the impact that Fintech operators and projects are having, the capacity of Fintech to disrupt the market, and the regulatory framework applicable.

The event, which was inaugurated by Garrigues’ executive chairman Fernando Vives, addressed some of the key questions which legislators currently have on the table. Following the recent transposition into Spanish law of PSD2 - the second European directive regulating payment services - , through Royal Decree-law 19/2018 of November 23, 2018, we are currently awaiting the implementing regulations for this law and a ministerial order to incorporate the changes regarding the legal status of parties involved in payment services. Progress also continues to be made with the processing of the Draft Bill for a Law on Measures for the Digital Transformation of the Financial System, which introduces for the first time in Spain the concept of the regulatory sandbox - a space supervised by regulatory institutions in which new business models not yet covered by the law can be tried out.

At the first round table debate, which was moderated by Luis de la Peña, partner at Garrigues, Juan Antonio Aliaga Méndez, advisor to the Subdirectorate General of Legislation regulating Credit Institutions, Banking and Payment Services at the General Secretariat for the Treasury pertaining to the Ministry of Economy, gave certain indications as to what is on the legislative agenda. He remarked that both the implementing regulations for Royal Decree-Law 19/2018 and the ministerial order which remains pending are likely to be enacted towards the end of 2019. Aliaga nevertheless stressed that both PSD2 and the legislation by which it is transposed into Spanish law are so detailed that there remains very little still to be regulated. Regarding the Draft bill envisaging the regulatory sandbox, he predicted that it could be presented to the Council of Ministers in February or March of this year. He reminded the participants that there are two objectives behind the sandbox: one is the digital transformation per se, and the other - a question of strategic interest for the Administration - is to ensure that supervisors are fully aware of this new reality.

Aitor Chinchetru, founder and COO de Fintonic, offered his vision as one of the new players in the market. He remarked that the PSD2 regulations are necessary and will enable players to innovate, although in his view, there remain certain critical aspects still to be defined. Observing that “the devil is in the detail”, he explained that the manner of actually operating in the market is likely to differ a great deal depending on how these outstanding questions are finally defined. Chinchetru regards the sandbox as a way of eliminating regulatory barriers to entry for entrepreneurs in the field of Fintech.

Elie Abi-Lahoud, a specialist from Accenture in means of payment and the design and marketing of all kinds of innovative technologies, stressed that when regulating  the financial market in this new environment, the legislature is right to view it as a threat, but should also see it as an opportunity. He also pointed out that the regulatory sandbox will encourage the Administration and the private sector to work hand in hand, which will help accelerate the development of Spain’s innovation ecosystem.

Inmaculada Anglada, who is the head of Samsung Pay in Spain, stressed that changes of this kind which are driven by technology take time in all sectors and require new ideas on ways of going about things. In her opinion, PSD2 can be of benefit to all parties, not just the start-ups, and it is important that there should be space for all players - including the traditional operators - in the regulatory sandbox. Also discussed were the risks related to cyber-security, another of the major challenges facing Fintech operators. Anglada mentioned, as an example, the problems relating to authentication in mobile devices when accessing means of payment. 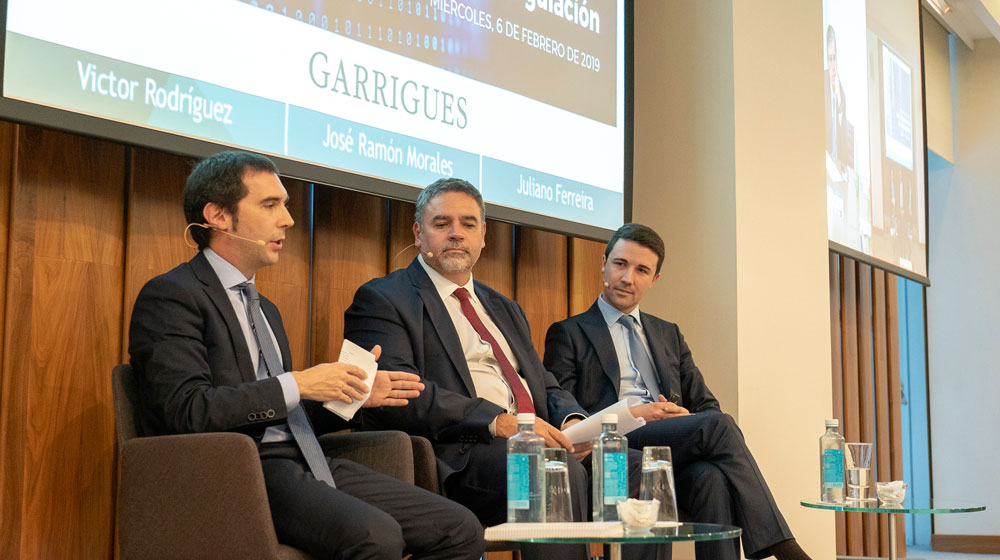 In the second round table debate, which was moderated by José Ramón Morales, partner at Garrigues, regulators from Spain, Colombia and Portugal set out their views on Fintech and crypto-assets, from the perspective of the regulation of capital and credit markets.

Víctor Rodríguez Quejido, director general of Strategic Policy at the CNMV, gave an account of the measures which the CNMV has adopted over recent years with a view to creating a regulatory environment which continues to protect investors but without curtailing innovation. He explained that the CNMV has adhered to the criteria adopted by the European Commission, whose recommendation was that the use of technology in financial services was to be encouraged but that it was important, at the same time, to remain vigilant regarding the associated risks.

Juliano Ferreira, director of the Issuers Department at the Portuguese Securities Market Commission, explained that the Portuguese regulatory body is also looking at ways to establish the right balance between investor protection and the development of the market. He explained that they don’t yet have a regulatory sandbox in Portugal and provided an overview, with examples, of all the different measures they are implementing in this area.

Lastly, Alberto Boada, secretary of the Managing Board of Banco de la República de Colombia, explained the current situation in Colombia as regards the development of crypto-assets, remarking that the authorities, so far, have focused more on prevention than on the regulatory aspects, by sending out constant messages to potential investors warning of the risks inherent in operations of this kind. He went on to explain that Colombia is also keen to strike the right balance in its regulation of Fintech, by “rationalizing” the regulatory burden, thereby favoring innovation and enabling the offer of financial services to go further than the traditional financial sector is able, in a manner which is conducive to the development of the Fintech sector in a stable environment in which there is adequate protection of investors and depositors.